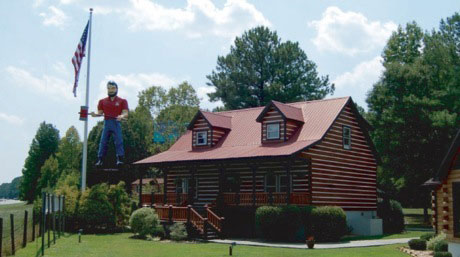 Towering over Interstate 95 some 40 feet high stands Paul Bunyan adjacent to Old Glory waving in the breeze at The Log Cabin Homes sales center at Goldrock exit 145 in Rocky Mount, NC greeting drivers along the highway.

The name Muffler Man comes from a small (now defunct) muffler chain that ordered and used a large quantity of the statues as part of its outdoor advertising. Actually the very first “Muffler Man” was an axe wielding Paul Bunyan statue for the Paul Bunyan Café in Flagstaff, Arizona in 1962. Soon after that, the muffler chain rolled out the use of the statues with a large muffler in the cast hands rather then an axe.

After that, slight modifications to the fiberglass mold produced statues of cowboys, indians, tire men, and other characters most with the same odd hand position – right palm up, left palm down.

To roadologists, all of these statues collectively are known as Muffler Men. Last produced in the early 1970s, the legendary Muffler Men have become part of America’s roadside nostalgia.

This icon even merits its own Muffler Men home page on a number of websites and publications including RoadsideAmerica.com and RoadsideArchitecture.com, where people can view and report sightings, share true tales, and view picture galleries of the different variations of Muffler Men. There even is a tracking chart and map of the United States that shows all locations state by state of roadside Muffler Men. 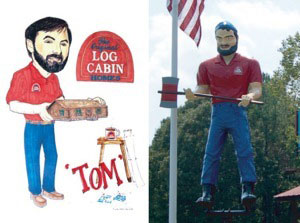 This Muffler Man version, Paul Bunyan; is now being used by Log Cabin Homes for its current advertising and promotion campaign. Log Cabin President, Tom Vesce said “The company has already been bombarded by Muffler Men aficionados for site visitations and picture taking alongside Paul Bunyan”. He went on to say “this statue became a roadside attraction at our Log Cabin sales center the day it was erected”.

Competitors’ reaction to the erected statue has ranged from brilliant to charges of idolization on the part of Vesce.

When confronted with the fact that the statue has an uncanny resemblance to himself; Vesce laughed and simply said “when in Rome do as the Romans do”. However someone needs to tell him that Rocky Mount is not Rome.

After more than a decade-long exhaustive search, Babe was finally found in the north country of Minnesota all alone but not forgotten.

Legendary woodsman Paul Bunyan traveled by wagon drawn by an Ox he called “Babe”, who had an unusually distinctive blue tint to its black fur.

Babe, also referred to as Blue Ox, along with Paul became part of our American Folklore.

Now, they are together again at The Original Log Cabin Homes. 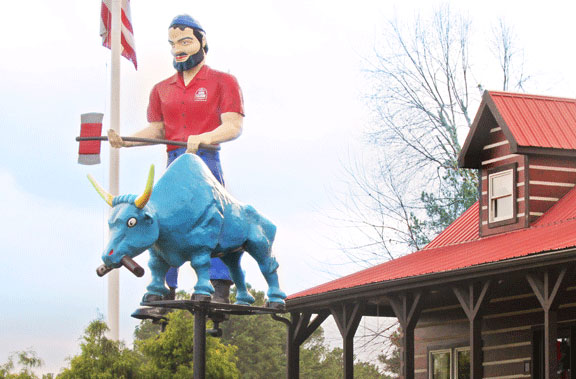 
Taking a bite out of E-Log Commerce

Welcome to our Online search tool to view our line of log home & cabin plans. END_OF_DOCUMENT_TOKEN_TO_BE_REPLACED

The Original Log Cabin Homes offers the easiest way in the industry to purchase a log home or cabin. END_OF_DOCUMENT_TOKEN_TO_BE_REPLACED